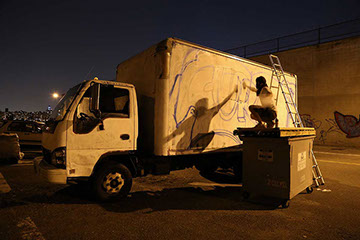 Curve started cartooning at an early age and naturally gravitated to graffiti art, which he first discovered in his hometown of New Haven, CT. His passion for exploration was forged during this time as he navigated the different neighborhoods he lived in. It was not long after he began his adventures as an aerosol artist that his family moved to Philadelphia. Here he found himself surrounded by graffiti, and graffiti writers, both new and old. His teenage years were spent painting in the streets, tunnels, and rooftops, using the city environment as a workshop and stage to express himself. This led to exploring other art-forms, which graffiti has roots in: including illustration, animation, and graphic design.

A few years ago he opened his web shop, making available custom products and prints. Curve shows his work in galleries and specializes in collaborations with architects and designers.